See it again with Streams On-Demand 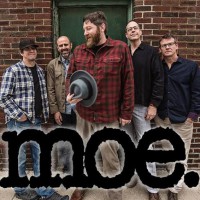 moe Livestream
Legendary jam band, moe., hailing from Buffalo, New York, US, have been creating their improvisational progressive rock since 1989, coming into prominence alongside acts such as Phish and Widespread Panic during the early 90s jam band scene.

This livestream concert by MOE. will take place over on Facebook at 8:30 AM PST on Tuesday 30 June 2020.